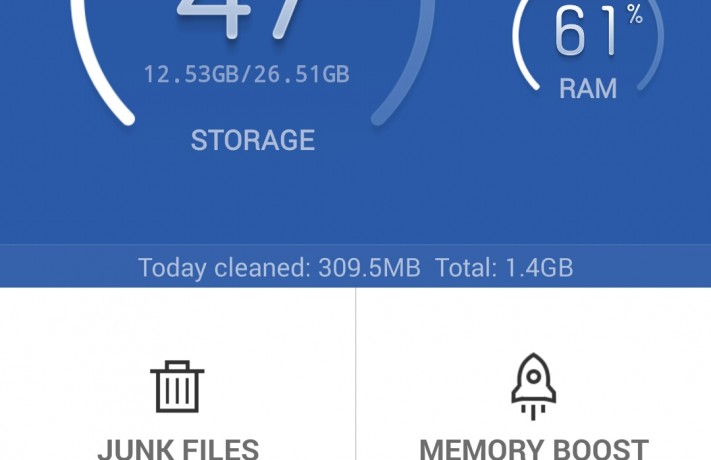 There are many resource management apps available on the Google Play store, which allow the user to either clean the RAM, close apps, manage files, but one app stands out from the crowd. Clean Master is one app which does all.

The app’s design is clean and beautiful. The user interface has also been well planned out, and any one can start using this app immediately.

When you open the app, you are shown the storage information and RAM information on the top half of your screen. The bottom half of the screen contains buttons to the features mentioned above. Pressing on either one of the features, opens up the screen of the respective feature.

The animation which is shown as the data is compiled, is just beautiful. The design and user interaction team has done well to design this app.

Clean Master is a highly useful as it allows the user to keep his device in check and to make sure that any unwanted resources are not being used. The main use of this app is to keep the resources being used in check. As a result, the battery life will last longer as only a handful of user apps will be running hence less use of RAM.

This feature allows the user to clean the junk files, those files which have been discarded by the apps but are taking up space in the memory. The less the RAM will be used the better the device will be performed.

This feature allows the user to stop and remove any of the running app from  RAM.

This feature allows shows the user list of installed apps, and allows him to either backup or uninstall the app. The user can also sort the list on a number of different parameters such as frequency of use, date used, app size, etc…

Clean Master is one feature packed app, and I highly recommend this application. You will not regret using this application, as it will help you keep your device remain healthy. Is that not what we want?