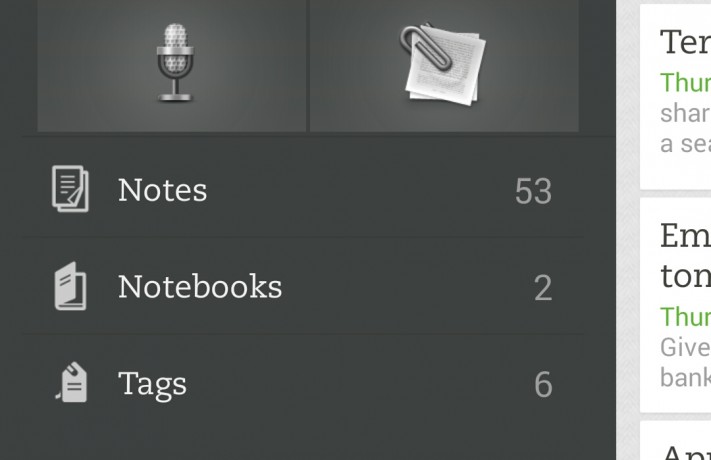 Evernote is a cloud based note taking app available for  number of different platforms. I will be reviewing the Android app of Evernote.

The Android app has been beautifully designed. The user interface is intuitive and the beginner user does not need any tutorial to start using the app. The first screen after logging into the app is the screenshot which allows you to create your new notes. I use a smart phone with 5 inch screen in portrait mode so I have quite a large typing area which makes It easy for me to type as I like to see what i have written a few lines above the current line. The text styling controls and bullets have been laid at the bottom of the typing area just above the keyboard which makes it further easy to type.

The submit button and other controls such as the attachment button have been laid at the top of the screen.  This helps the user from incorrectly  performing any function which can have some side effects.
The menu can be opened by swiping the screen from left to right or by pressing the back button at the top left of the screen when the app is launched, which has other useful features.

The usefulness of the app lies in its use of the cloud and how seamlessly the app and other platforms sync seamlessly with the cloud. For example I have written this review on Evernote itself and this review will be saved in my phone’s memory until the app is synced with the cloud.
I have the app at my disposal where ever I am and I can jot down all of my ideas right there and then even if I do not have n internet connection. The app syncs with the cloud as soon as I connect my smart phone to the internet. The cloud further helps keep my data safe. I don’t have to worry about my phone crashing and me losing all of my notes.

There are more controls in the menu such as the “Add New Note”, “Take Picture”, “Record Audio”, and “Add Attachments”, which allows the user to add these items to their notes fairly easily. You can even create and manage notebooks so that you can organize your notes.

I congratulate the Evernote team for make truly a remarkable app and even more a truly remarkable system with which the app integrates into. I highly recommend this app to all.
Tweet