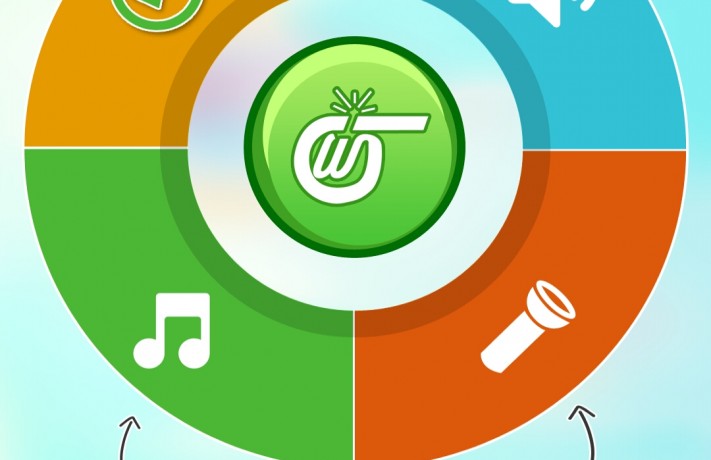 There are times, when you forget where you have left your phone(device), and you wish that you had some sort of an app installed on it so that you could find it easily.

Don’t worry as there is an which does just that. Developed by Nine Hertz India, Whistle Phone Finder for Android is an app which plays music when you blow a whistle helping you to find your phone.

Arrows have been incorporated into the design of the app which inform the user what each button does. I think this is a good idea.

The youtube video, help screen, and the pointers on the homepage help make the experience of using the application much easier.

There is also an option to turn on the flash light from within the app, but from my initial testing, i did not find the flash light being used when the app plays the music when whistling is detected.  From the help screen i found that the flash light has been implemented as as an extra feature to help find the user find other things in a dark room. I don’t know why was this feature needed in an app which is supposed to be used to look for the user’s phone.

This app is really useful for all of those people who forget where they have left their devices. Keeping the media volume to a high level will help the user find the device from a far distance, however i have not tested the maximum range of which the device can detect the whistle.

Problems that I found

There is no option to stop the music once you find your device. The music continues to play even if you find the phone. I could not find any option to turn of the music.
Another problem that I found is that when the screen is turned on whistling is not detected, so those users who have set their screen time out times to be long (on Huawei Ascend P7 android Kit Kat the max screen time out is 30 minutes). So if the user forgets where his phone is in these 30 minutes then the whistling won’t work, and he will have to wait for 30 minutes to pass, but then those 30 minutes will have been lost. We all know wasting time is a high level offence.

Furthermore, I also found out that the app for reason whole the device’s screen was turned on , the app detected that a whistle was detected and started playing the music.

Lastly, I noticed that my battery ran out quicker than it normally does since i had installed the app.

As stated above, this app is useful for those users who forget where they have left their phones, but this app has quite a number of bugs which need to be fixed in order to make this app much more usable.