My Experience At A Game Development Hackathon 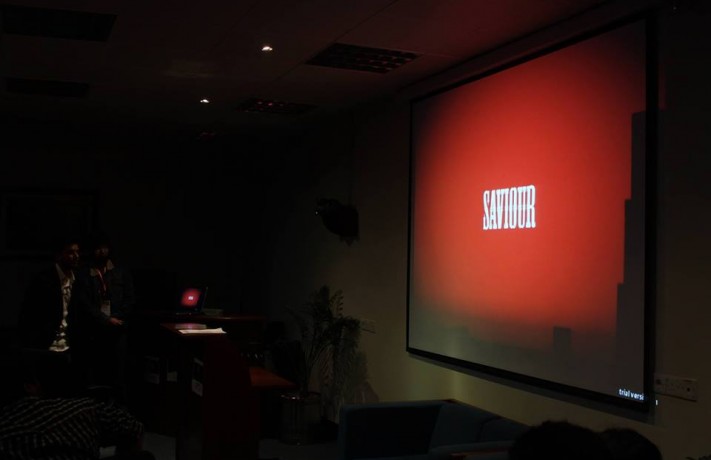 I took part in the Global Game Jam 2014 Lahore a game development hackathon which took place in early 2014 and was organized by two game development studios in Lahore, Pakistan Mindstorm Studios and Tintash.

This was not my first ever competition, i had taken part in a coding competition when i was in my university, and also in the Softec 2012 Software Competition held at National University of Computer & Emerging Sciences where i displayed my final year project (a 3D fighter jet game built in OpenGL ES on Android), but this was my first ever hackathon.

I am technically sound, and i love programming, and since my final year project was a game and i also had developed an advanced text based version of ludo in my computer programming class, and also having about 2 years of experience in the software industry(1 year in the manufacturing + 1 year working for a software startup) i thought that i was ready.

I registered myself for the event after finding out about it when the registration was about to end. Another reason why i had decided to register for this was to make up for the time when i had not registered for the startup weekend held at Lahore, which i regret not doing so, mainly due to the hectic schedule at my former company, but this time i was determined, that if i was selected i would go and attend, at least i will meet new people and learn something about the industry.

I have always wanted to make games, i know the maths, the programming, the logic. The only place where i lack is in the art. I have always told myself that i will learn the advanced form of 3d modelling, and then i will start to make games.

I as a developer believe that i should have the understanding of the basics, so that i can build onto that. If i want to learn a new programming language, i will study what the language offers, me and then i will make what i want to. I have had a nack at drawing from an early age but i did not keep at it, and like all grew out of practice. There were spurts of energy where i would spend days drawing, and then just like that drop it all, and move onto the next thing.

Receiving the call of being selected for the competition was really wonderful. The event duration was of 52 hours. Knowing that i had to reach by 6pm to the venue to register, i arrived early at my office at 8 am (my usual  time was 10 am and i would leave between 6pm -12 am, i have even spent longer hours, but that is another story) so i could leave by 5pm.

Excited and feeling nervous, as i did not know what i would do. I believed in myself and got my self registered. When i reached there i found out that most of the contestants already had formed groups, and the group size was to be of 2 to 5 persons, which were to include,  an artist, a developer, a team lead, audio guy, and some other of whom i do not remember now.

The orientation went well, where the CEO of Mind Storm Studios Babar Ahmed and the CEO of Tintash Murad Akhtar and explained to us what we were to do. I had once applied and given an interview at Tintash but was rejected due to poor performance ( i don’t like to give interviews, but i don’t mind taking them 🙂 ).

I had heard of the wonderful work that Mind Storm Studios and Tintash was doing, and i was in the presence of legends, and i was dumb struck. Being an aspiring entrepreneur my self then(then i was working part time on my own projects) i was in heaven.

At the end of the orientation i was to join a team and that is where a problem occurred. Since most of the teams had already been in formation before the competition, i had to talk to people to ask if they needed a team mate. I found one another developer who needed a team mate and i then contacted the organizers of our team. So now were two developer, but we needed a designer someone who knew art.

The organizers paired me up with one individual (Faisal Shareef) who was not to keen on being teamed up. Another problem hit, the tools that we used were not compatible. He developed games using unity 3d, while i used opengl desktop and opengl es on android and had no experience with unity 3d. However, i was determined to team up with him, as i needed a team mate to compete in the competition, and also having seen that most of the devs used fast paced development tools such as game development frameworks, or game engines i needed to team up. I would have come up with something, but i knew the art would have been real bad if i would have been on my own.

The organizers also tried to convince him to team up.  One of the organizers even said that “some times 1 and 1 make 11”. I having experienced that working alone is extremely difficult and not easy at all, i also encouraged him to team up, and we ended up teaming. We ended up naming the team “Two Men Army”, and our game’s name was “Saviour”.

After the teams were formed we had the theme around which we were to build the game around. The theme was “Shadow”. We had to use the element of shadow some how.

The clock was ticking and we started to brainstorm for ideas. We came up with a few ideas and narrowed down to two ideas. We ended up selecting the following idea, which further improved and matured as we worked on it and built a story around it.

“Our game started around a guy who is dying as he has had a heart failure. The guy’s shadow rises and has to go through a maze of sorts and solve puzzles, and has to bring back the heart for his master in order to save him. The twist that we had added was that the shadow has to get the heart and come back with it before his master dies. If he dies then the game is over.”

As we mentored by experienced professionals in their fields our story grew, and matured. I learned about game design, art, music. In a game the graphics and art are not the most important thing. They are important, but not as much as i thought they were. The game’s story, how it captivates the player, audio music, game play all have a major role.

My team mate handled the art, while my role in all of this was in game design, helping design the obstacles, searching for the awesome music sequence, and also driving back and forth as we did most of the development at my home and used to go back to the venue at the appointed times.

There were times when i was at a war with myself, as to what my role is, what is it that i am bringing to the table as i was not doing any development. Being a developer, and being part of a project where i let the others do the work is a bit difficult to handle, but since i am now an entrepreneur this is what i will have to do. Let others do what they do best, while i handle the business and production side of the things.

The only way i kept my self sane was to realize that what i am doing is also very important. In the short time that we had, it was best to let my team mate do what he does best, and to support him in other tasks which were also very important, such as making sure that our game documents were submitted on time, preparing the video of the game, looking for audio (background music and sound effects),  because without them our game would not even be considered and be worthy enough. I understand that a team contains many different individuals who bring together different skills and talents to build a team.

I like to think that my contributions and along with my team mate’s(Faisal Shareef is the ultimate combination that every computer programmer wants to be, he is also really good with art and also programming. I am glad that i met him. He is such a passionate fellow.)  and our understanding of the constraints that we were under, allowed us to gell well as a team, and not to break under the pressure. The end goal was to complete a game under 52 hours, and i think we did well. We found out that there was a team which broke up, and they could not develop a game.

The time came for our presentation. Looking at what the other teams had come up with, caused some chills in my team. We did not know whether we were good enough, but we knew one thing, that our story was good. It was going to captivate the audience. We knew that we as a team had given our all and that what ever happens will happen.

The presentation went well, and we gave the demo of our game. We even got a shout out from Babar Ahmed that we were the only team who actually met during the competition and had not known each other before. This was really nice to hear, and we were applauded.

The demo went perfect, the que of the music was perfect, people were clapping when the the shadow got the heart and the music started bringing in an aura of fast paced urgent need to survive.

In the end it all went well, me and my team mate came in third and we also won the award for “Visual Production”.  When we were told that we had won the award for “Visual Production”, i thought that was it. We were not going to win any position since we had won an award. What i did not know was that we were still eligible for a position, and when we were announced as the 3rd place winners, me and my team mate were stunned. We could not believe that we actually got a position.

Me and my Faisal were not professional game developers. I was in the business apps industry, and Faisal worked at a small game development company part time and was also studying for his bachelors at that time.

We actually beat professional game developers. When we were receiving our certificates, the organizers were also amazed at how we worked together as a group. This shows, that with passion and dedication, David can definitely beat Goliath.

One Response to My Experience At A Game Development Hackathon